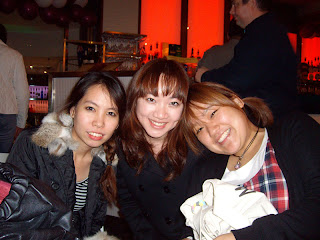 Me and my friends.

Yesterday night was Presentation Night for family and friends to come our classrooms to view our work for this semester.

I sent an email to a few of my friends but only two of them made it. Better than zero friends! Yep so it started at 6pm and it ran until 8pm (I think?) but my classmates and I left around 7.30pm to get dinner.

I was excited to show my videos to my friends, in particular the first one called 'Mirror, Mirror' because the one who starred in it came along! I can't remember their reactions to my videos but they didn't say anything negative, so that's a good sign!

So my two friends left before I did. My classmates and I went to the city after we were done. I had to resubmit some things for my assessment first before going, of course. Easily done.

So the four of us (Me, two classmates and a classmates' friend) went to some korean restaurant that I still have no idea what it's called. We go there frequently too =_=

My two classmates were super hungry and ordered a large seafood pancake thingy. I had something like Bi Bim Bap and it had raw beef in it. Thankfully I didn't feel sick from eating it but I'm not ordering it again. Once my friends had eaten the pancake thingy they went and ordered a chicken salad !

After that large dinner we headed to Beach House for some drinks and to watch the State of Origin. It wasn't actually that interesting, seeing as the score was, like, 30 - nil when we walked in. QLD in the lead so it was no surprise who was winning this round =_=