Today is Harmony Day and my uni celebrated it today by showing performances from different cultures.


So WHAT is Harmony Day?

"Harmony Day is celebrated around Australia on 21 March each year.
It's a day when all Australians celebrate our cultural diversity."
The continuing message for Harmony Day in 2012 is that Everyone Belongs, which means all Australians are a welcome part of our country,
regardless of their background. It's a time to reflect on where Australia has come from, recognising the traditional owners of this land. It's also about community participation, inclusiveness and respect – celebrating the different cultures that make Australia a great place to live." - harmony.gov.au

This message should be reinforced more, not just here in Australia but worldwide. There are still so many racist idiots out there. Being born and growing up in Australia, I have no issues with people from other cultures. From a young age, I was taught about getting along with others, didn't know anything about racism until I got to high school. That's when the racism and bullying started for me. Since I graduated from high school, things have become much better but still, I still get the occasional racist remark.

A friend once told me (well on his Facebook status lol) that it's better to feel sorry rather than get angry at the person who's making fun of you because one, they're not lucky enough to know about different cultures and secondly, don't have the ability to speak a different language.

Anywhos, enough about that because it's a waste of time dwelling on racist losers when that time can be spent making new friends from different countries ^_^ Last night I had the amazing opportunity to see Wong Fu Productions! I was so pumped for it when I first heard they were coming to Brisbane but I really didn't want to miss out. I almost did but thankfully I got my friend & her bf to come with me =)

It was a really chilled environment where Wes & Phil just talked to us about their experience and growth of Wong Fu Productions. Sadly, Ted wasn't there due to personal issues (that's what Phil said) and had to stay back at LA. BUT at least there was Wes <3 oh my gosh~~~Wes, WHY ARE YOU SUCH A CUTIE???!! XD ahaha They're both really funny cool guys and it would be super awesome I reckon if we had the opportunity to hang out with them.

Throughout the seminar (is that what you would call it? O_o) they played videos of their work including an exclusive video that had not been posted online yet. Felt really special and exciting to view something other people have not yet seen ^^

Then it was a quick Q&A session with the audience then it was time for Meet & Greet! XD We told to stay seated and Wes & Phil would come through each aisle to sign one thing. I saw one guy getting his Macbook Pro signed =O That's amazing that he would do that!!!! My friend and I got the guys to sign the poster that was being sold as we walked in. (I'm so grateful to my friends that bought the merchandise because I had no cash on me T__T)

Anyways I'll end this post with the best part: photos =) 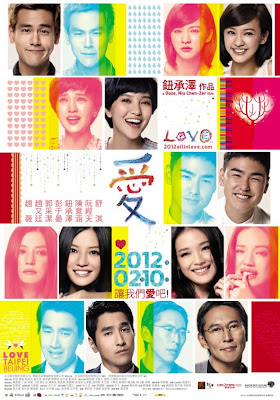 I went to watch LOVE yesterday and it's an alright movie. I found a lot of hype about it on Facebook but I personally didn't find the movie that spectacular. To sum it up, this drama and comedy move is about:


"Eight people try to end their loneliness by searching for that one person to love, who can make their life complete." (IMDb.com)

There are the usual set of characters: rich girl, poor girl, poor boy, single mum, little boy who wants a daddy etc etc ... Each of them have their own story lines but each characters are connected.

The comedy side of the movie was actually pretty funny. Of course it's not the typical Hollywood in-your-face kind of humour but still funny. For example, there are two girls fighting because one of them slept with the best friend's bf and she's pregnant.

Everyone in the audience cracked up laughing at that line because typically you'd expect the girl to reply with the guy's name instead of saying that.

The director Doze Niu also stars in his own movie as the rich Uncle Lu~The one scene that had an impact on me was when Niu was sitting outside in front of his huge mansion crying. I found that scene spoke a lot, meaning doesn't matter how rich you may be, you can still be unhappy or lonely if you don't have someone to love. Or something like that >< I'm really bad with these kind of analysing >< Would I rewatch it? Personally, no. It was a nice film but it didn't captivate me that well. Here's the trailer: