Today I will be focusing on a nail polish review, and as you can judge by the title, it is Essie's Fishnet Stockings. I own a few other Essie nail polishes and I can say with confidence the quality of Essie is superb!

"Fishnet Stockings" is a brilliant bright cool-red (I'm really bad at describing colours, sorry) but when I apply it on, it reminds me strongly of ripe juicy red apple. 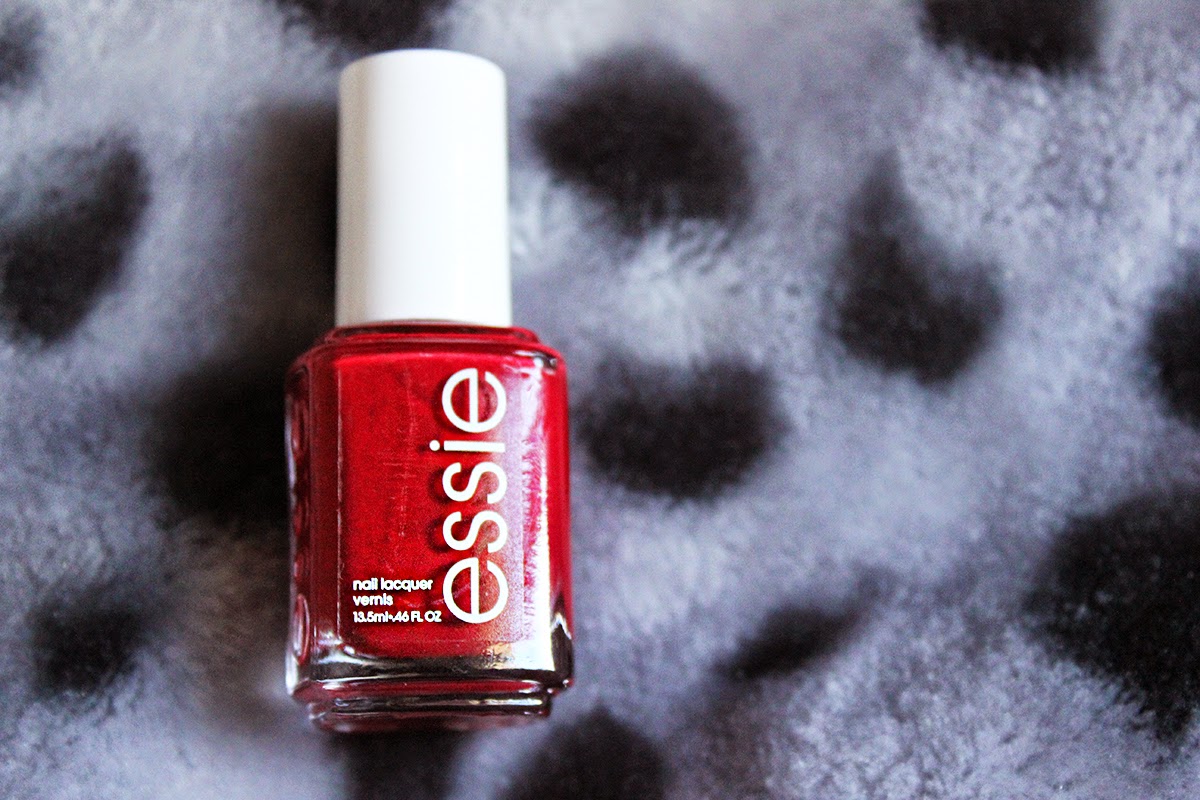 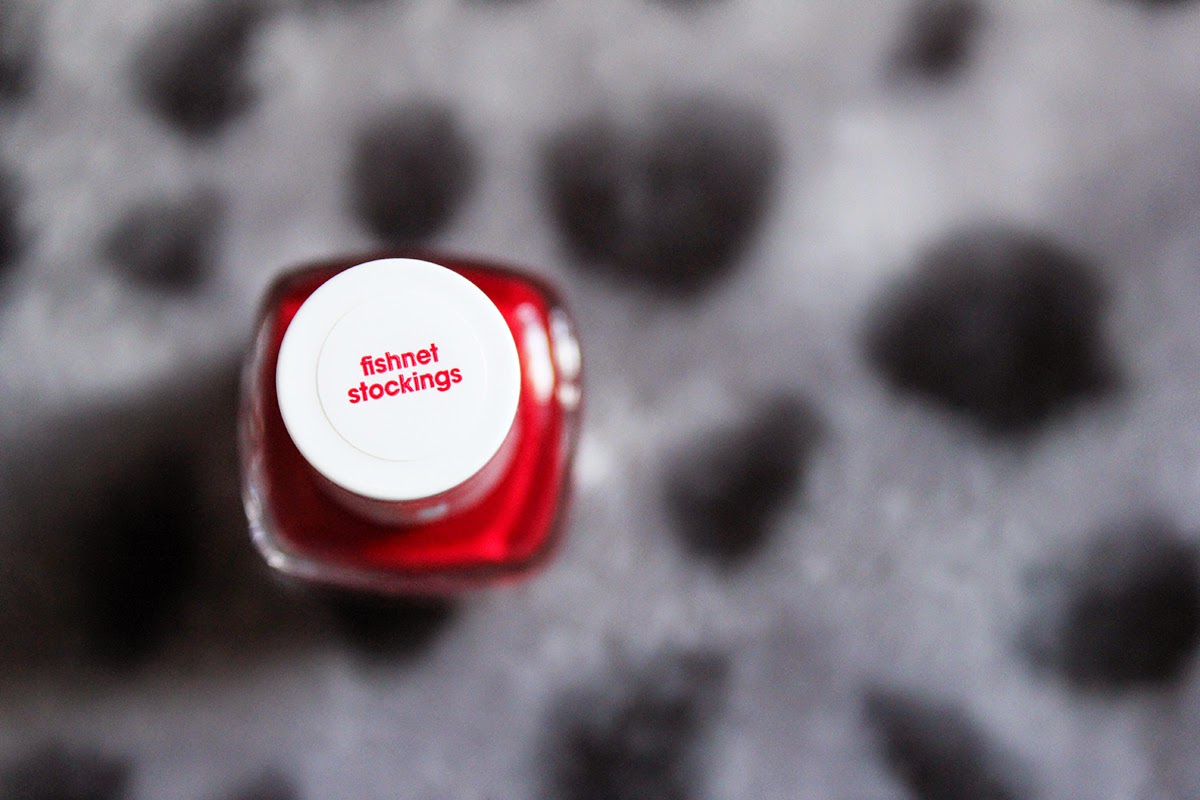 I only applied one coat of "Fishnet Stockings" and can see already it's very bright! I later on applied another coat and sealed it in with a top coat. 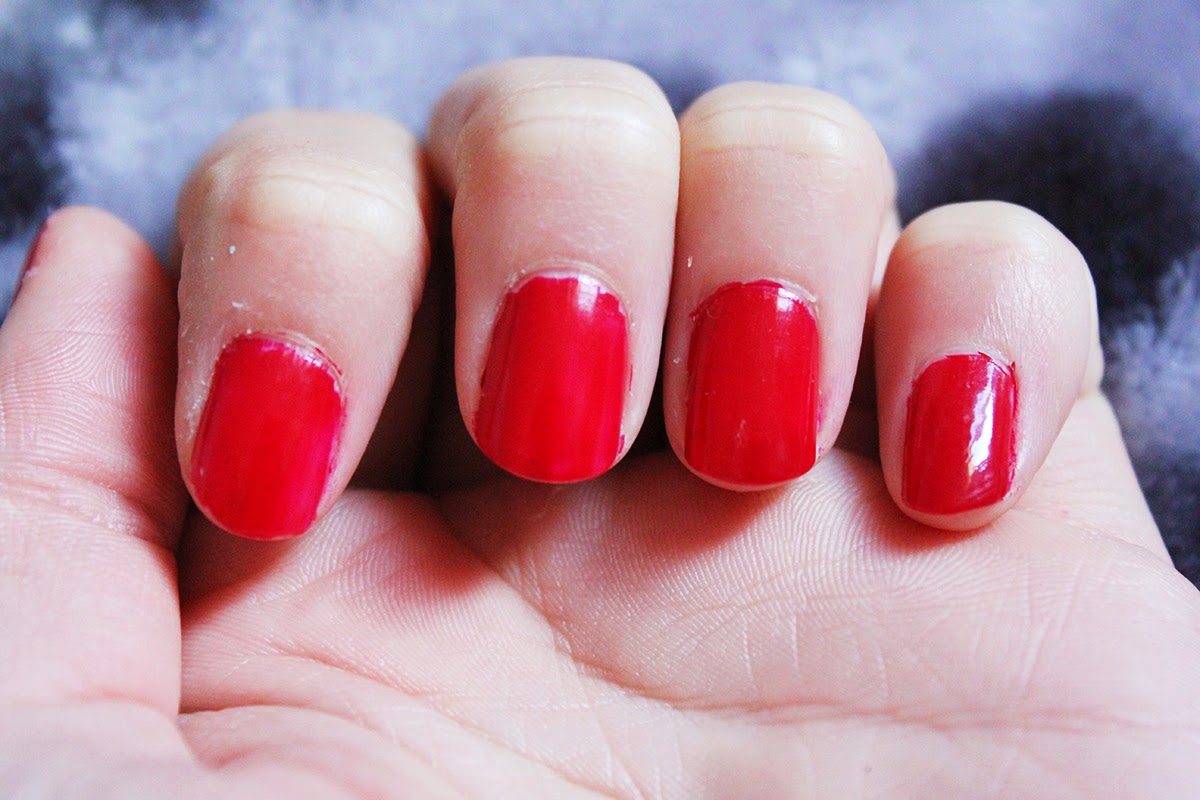 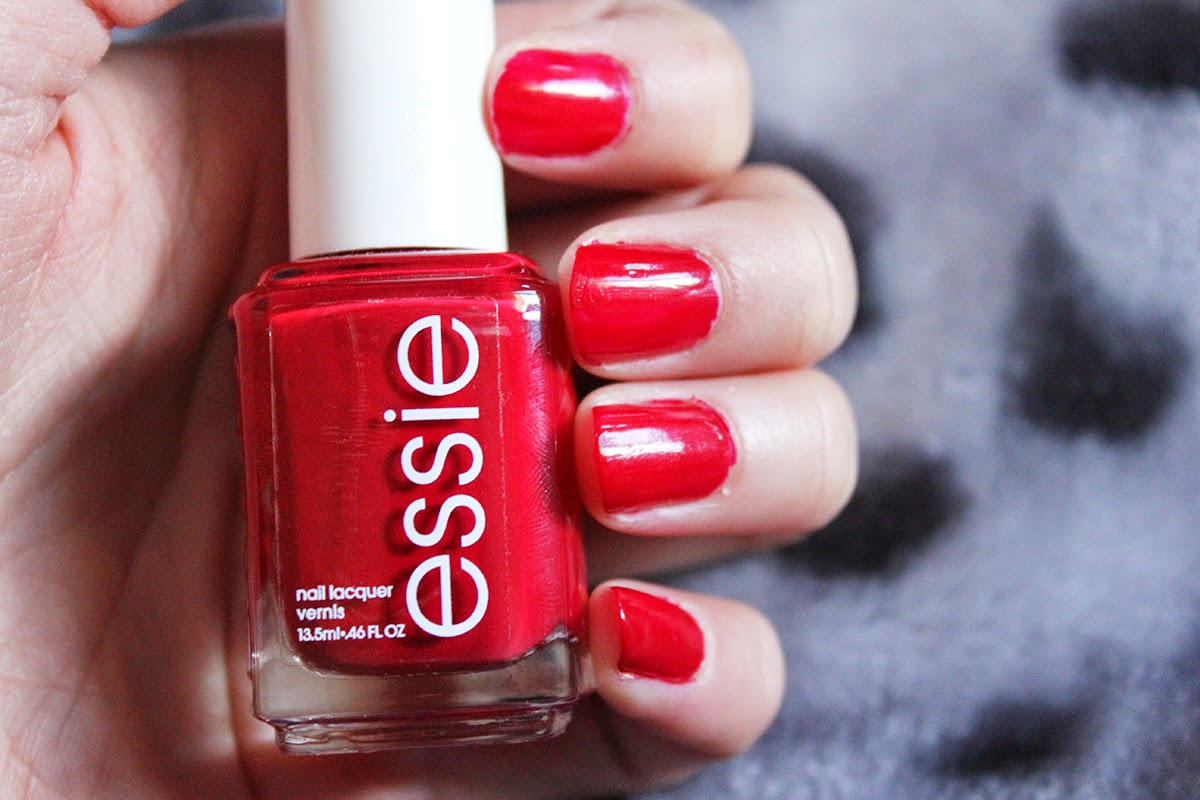 I was always hesitant to purchase a red nail polish because I felt like it associated with being vampy but actually it's fun colour to wear. I now feel like it gives an drab outfit that pop of colour it needs without being over the top.

So recently there has been an increase of multipurpose beauty products on the market. Particularly, with products designed to used on both cheeks as a blush and on the lips as a gloss or lipstick (depending on the finish of the product).

Shu Uemura released a collection of lip products as part of the Mika for Shu 2014 collaboration. Mika Ninagawa also designed the bottles of the cleansing oils, primers, eyeshadows, eyelashes and nail stickers as limited editions but these Tint in Gelatos are part of the permanent range and are available all year round! How pretty are these bottles! I want to collect them all =) 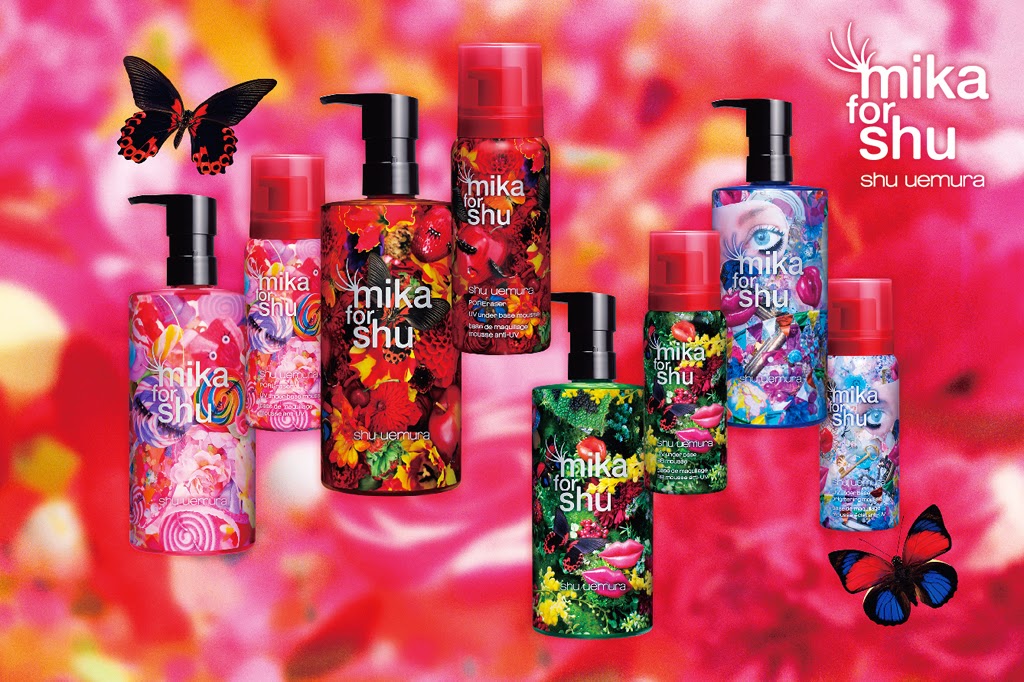 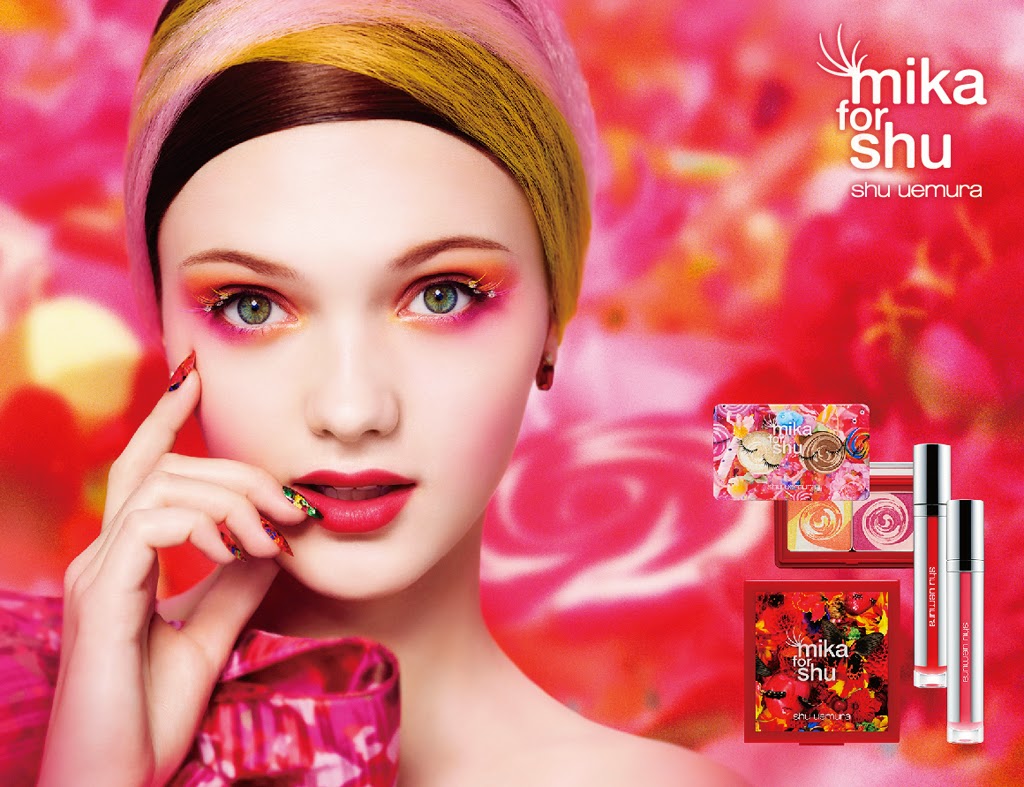 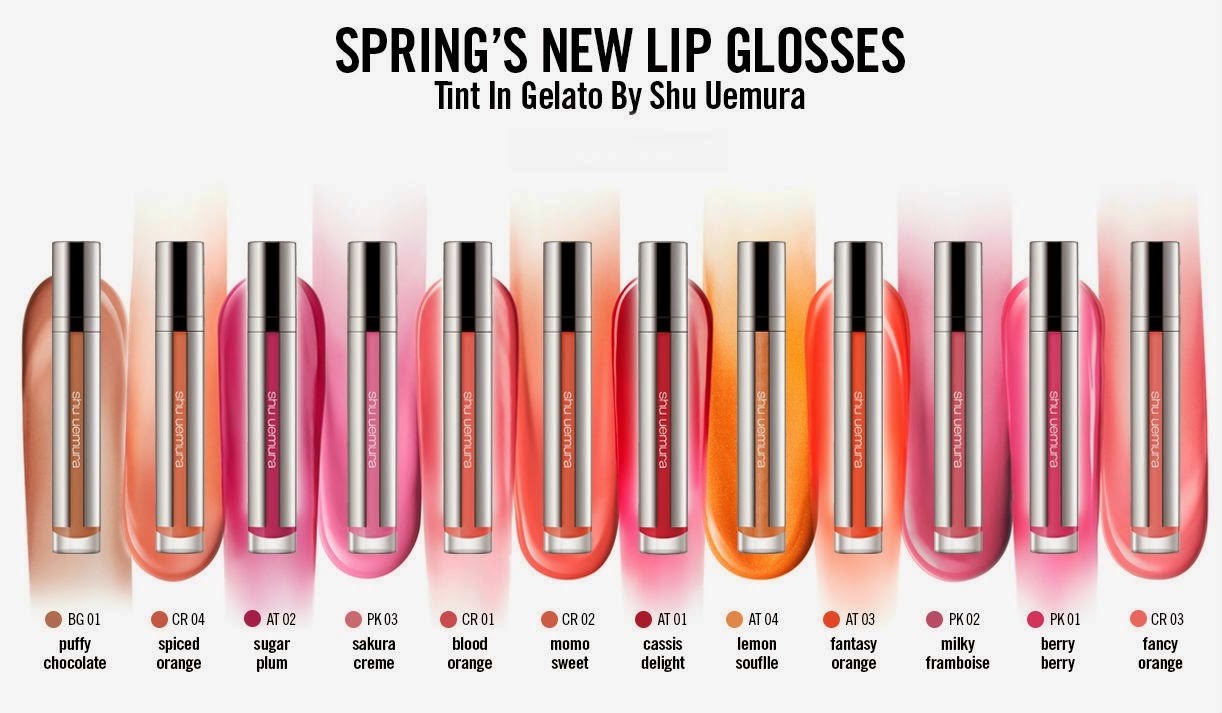 Today I will be reviewing Shu Uemura's Tint Gelato in CR04 Spiced Orange!

☼ Impressions:
CR04 is a really pretty coral-peach colour. I initially chose this colour because I did not have any orange or coral shades in my current collection. The texture is quite creamy and velvety when applied.

When I used it on my cheeks as a blush it applied beautifully! Blending was really easy but just got to be quick. As it is creamy, the colour lasted all day for me, especially when loose powder was applied. When I didn't have any powder on, I noticed the colour was less vibrant.

When I first used the wand directly on my lips, it applied very well - velvety and creamy. At first I really liked the finish and how it looked on my lips. One swipe was all I needed to achieve full opaque! There's NO sticky feel afterwards, which is a massive bonus!!

The wand itself is slanted and has the typical "fluffy" applicator (Really bad at describing, I'm sorry). The applicator does have a hole in it but I don't think it makes that much of a difference in applying.

HOWEVER, within minutes, I noticed a problem. Despite my lips being fairly smooth, the product began to sink into the lines of my lips =( Not exactly a pretty look...And the texture is not ideal for continuous layers because it will just sit on your lips.

But I found a way to overcome that issue! I found that by applying with my fingers and give a more "stained" appearance was better and less heavy on my lips. This method stayed on my lips for about 3-4 hours without eating or drinking.

☼ Advantages:
- Multifuctional product ~ can be used on cheek and lip
- Very pigmented
- Easy to blend
- Wide variety of colours from pinks to reds to oranges

☼ Cons:
- Can be drying on lips because of the cream texture
- Is a bit more on the pricey end compared to other brands

☼ Would I repurchase?
In short, no. Shu Uemura is a fantastic brand, particularly with their cleansing oils and other beauty products but this product is not really worth it. You don't need this in your collection but it is a nice addition. Especially with the colour range you can use as a blush.

Thank you for reading my review on Shu Uemura's Tint in Gelato. I will post up more beauty reviews very soon!

To anyone that works in retail or hospitality or ANY kind of job that deals with customer service, you can understand how rude some customers can be! So rude and can be very unreasonable!

I work as a waitress at a restaurant (not the most glamorous job I know but better than NOT working) and every time I work I am always interacting with customers. Some people are more polite than others, some people are more ruder. It varies but the point of this is that I am constantly having to deal with difficult people. Some people have certain dietary requirements, which can be difficult to work around, or some people want special requests i.e. chop and change the entire menu =___=

Anyway, at my restaurant, customers are allowed to bring in outside drinks, including alcohol beverages and soft drinks from other stores. At our restaurant, we also sell a variety of drinks that are the SAME as the ones that customers bring in from outside. How the restaurant works is that we tally up all the plates at END OF YOUR MEAL, not progressively as you're eating. Once the customer has finished eating, a waiter will come over, count up everything and give you a bill to then go to the register to pay for.

What happened in this story is that I was already at the register serving another a customer when this particular customer comes over with no bill in his hand. So after I finished the first customer, I started to step out to go over to the table to count but I saw another co-worker already there, tallying everything up. So I went back into the register to wait for my co-worker to finish counting the plates and to give the bill to the customer. When the customer comes over to the register, he keeps looking at the bill and checking back at his table as if to check what was on the bill correct or not. I asked him if everything is ok but he doesn't respond and hands me the bill.

After I type everything into the computer it is displayed onto the screen for the customers. The young lady next to him asks,"What is the $3.80 on the screen?" I told it her was the price of a drink. They both shook their heads and said no drinks. I thought I accidentally mistyped it in sometimes so I quickly take the original bill and check. Yes, there is a note on there stating they had a drink. Confused, I asked my co-worker who wrote the bill about the drink and he said there was a Ginger Beer on the table. I think this is when things started going crazy. The young lady said no that was from another shop. After she said that I deleted that item off the computer but still they were not happy. I can't remember exactly what I said but I said our store also sells Ginger Beer, that's fine if you brought it from another shop but just let us know next time. The lady said there won't be a next time but the guy just went off at me. He said things, like,"You can see clearly, with your own two eyes, when we came in we brought it with us. How can you accuse us of stealing from your store." I explained we also sell Ginger Beer here too but he wouldn't have any of it. He spoke very quickly and angrily (most I could not understand) but I clearly heard him say "so fxxk off" to me at one point.

Even the young lady next to him was shocked. She asked me if they can just quickly pay and go.

He keeps going off at me saying I was rude and he was being very polite to me. I wanted to smash his face and ask him, where does saying to someone to fxxk off consider polite. I refrained myself so much that time, partly because I was scared. My heart was beating so fast during that time.

Just as he left I said,"There's no need for foul language either" which was probably a mistake on my side because he suddenly came back and said,"Excuse me?!" like 10 times and death stared me =_= He started speaking to me really fast again (which I still didn't understand) and eventually just ended it with,"Just do your job" and left.

I'm just pissed off and angry when, honestly, it was just a mistake. In no way do I blame my co-worker who wrote the check and I don't see how this is my fault.

Cheers to all the people that work in customer service!!!!