Yes so I finally went out on a Friday night after weeks & weeks of staying at home (Actually it was just 4 weeks but that's just as long).

So after a long day at class (and realising how much shiet I needed to do by next week!)I went off to the city to meet up with my long time high school friend! We met up in front of DJs. I was soooo surprised when I saw what she was wearing!! She looked like a million bucks! =O It was, like, this black silky blouse with a black high waisted skirt (i found out later during that night it was actually a one piece lol)

Anyways the first thing we did was go and take Purikura ~
Then for dinner we ate at cafe called Bubbles. Actually we wanted Thai food but we cbf going to China Town so we just went there lol

So i had stirfry while my friend had thai curry, that was hot! Like as in burning hot! I took one spoonful & my tongue was burning =_= I don't get how people can enjoy eating spicy & chilly food >o< We also both a drink each.

To get to the good part we had DESSERT!!! ICE-CREAM!!!
I honestly was expecting something crappy, like, 2 scoops of vanilla ice-cream in a small bowl but NOOO!!! The waitress brought them out in this medium bowl shaped kinda like a flower, with 4 scoops of vanilla ice-cream & caramel topping with frozen raspberries, malt berries & blueberries ! OH and a strawberry wafer =] 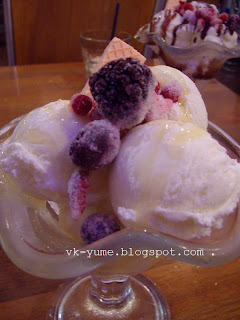 My photography skills are lacking but it was soooo yummy despite the fact the photo does no justice. I am totally going back there for moarrr!!!!
Posted by Anne | mz Didi at 10:54 AM